The first night on the road heading up to Old Vasselheim, and it’s quickly realized that Stubby is the only one of the three of them with any sort of camping experience. She shows them how to set up the tents, Tāmarai gets a fire going, and while she and Stubby set about butchering the two snakes they killed earlier that day, Rinn gathers up firewood. They experiment with how to preserve the rest of the meat, while Stubby uses some of it (plus their rations) to make snake stew/soup.

While she’s cooking, they get to talking. First, the unnaturalness of the local landscape is mentioned, Tāmarai not knowing if this was ‘normal’ or not, as the woods in her homeland are much different. Sun Days are also mentioned, leading Rinn to share a bit of propaganda from the Dendwellian Empire that now makes sense, about the ‘dark elves in the sunless lands’. At least now there is some sort of peace between the lands, though Stubby realizes that she and Tāmarai have years of information to process about what’s happened in the world.

She hopes for some guidance, and even more so when they reach Old Vasselheim. Tāmarai asks about this, and Stubby mentions the relationships that many in her family have with the gods, and various experiences. The visions and calling she’s gotten herself have given her some faith. Tāmarai says she’s had no experiences like this. Plenty of knowledge, but nothing direct. Then Stubby asks Rinn about this- who had been brooding over his own dream/calling to Old Vasselheim and gets startled over the question.

He finally starts talking about it, saying he thought it had been a dream*, but now wasn’t sure, especially when he found out lightning had struck the place in New Vasselheim where (in the dream) he had been. Stubby wonders why he hadn’t said anything, which brings up the whole issue of the difference in how each of them trusts other people- Stubby having grown up in an environment that fostered trust, Rinn not so much.

They take a moment to go over that, (and cautiously try the snake soup, which is decently good). Rinn finally brings up the rest of the dream, being challenged to go to Old Vasselheim and find some sort of forge. Stubby puts it together that it’s Kord’s Forge he’s looking for, and is thrilled at the idea. Tāmarai also puts clues together, and cues Rinn on this as well- Kord is the god of storms, and Rinn’s magics seem to be storm-based.

Rinn is not thrilled with the idea.

While he’s cursing and processing that, Stubby brings up the reason Tāmarai has come to Old Vasselheim, namely being carefully not-asked by the Xhorhasian Ambassador to look for something. Rinn’s put enough information together (from various sources, including Otel at the Take), to put a name to it, Luxon.

They all have a lot to do here in Old Vasselheim, and resolve to help keep each other safe while doing them.

Stubby is taking first watch, leaving Rinn and Tāmarai to deal with the first night of sharing a tent together. (They only purchased one tent that can probably fit the three of them snuggly, figuring that one of the three will probably be on watch and not actually in the tent.)

Tāmarai has a whole routine she has before going to bed, which she is still keeping to even out in the middle of the woods. Rinn is still in his clothes (and boots), though did remove his weapons and armor to be a little bit more comfortable. He’s still not used to this, and when Tāmarai is trying to get comfortable, he realizes she isn’t as well, and Rinn makes a slight joke about the uncomfortable ground beneath them- which helps break the ice a bit. Tāmarai chuckles and starts making some plans for stuffing better bedding into the bag of holding, and perhaps a larger tent, so there would be room for her things, and Stubby’s things, leading her to realize she doesn’t know that Rinn’s ‘things’ are, his exact trade, his hobbies, anything. She asks, and he misunderstands at first, but then realizes that Tāmarai is asking about Rinn’s skill set. Stubby had figured out that Rinn was a thief, but hasn’t shared that with Tāmarai, so Rinn tells her. Now his skills in the Take make sense to Tāmarai, and she’s relieved that he has a place where he can use them much more safely than as a thief. The Take is still a dangerous job, as Rinn points out, but at least he is helping people rather than hurting them, though Tāmarai is sure that Rinn did his best to not hurt people, even as a thief.

This leads to a lot of introspection on Tāmarai’s part, about the inequality between her life and Rinn’s. He does reassure that his life is better here in New Vasselheim, since he did make the better choice to join the Take rather than look for the local thief’s guild. The conversation seems to wind down, but then Tāmarai realizes she has forgotten some of her evening routine, and gets up to put on all sorts of hair/face/skin moisturizers. The effect of them is a bit startling to Rinn, (she offers to share, he declines), leading him to finally ask Tāmarai a question- if the color of her eyes (fushia, compared to his violet) was normal for her people (gnomes, specifically Xhorhasian gnomes). (His own eyes not being a normal color where he was from, leading him to try to keep people from noticing them.) It is slightly common, at least for elves where Tāmarai is from. That’s at least enough of a (confusing) answer for Rinn, and they both finally turn in for the night.

Stubby ponders over her watch, stepping away to look at the site of Old Vasselheim. She feels called by the Raven Queen, and wonders if that is a slight to all the other gods she and her family have worshipped. But finally she realizes that she can still hold all of them in her heart.

Tāmarai wakes up, and takes Stubby’s place on watch. Stubby goes and crashes in the tent next to Rinn, already snoring.

Tāmarai checks out the camp site, then looks towards the ruins of Old Vasselheim, lit up by the pillar of fire. She hopes and prays that she can keep her own city from a similar fate, and that they can also help Stubby return to her family.

She writes an account of things in her diary, in case they don’t survive it will have information (and warnings) for others, then spends the rest of her watch in a silent dance practice before she wakes up Rinn for his watch.

They trade places with him giving Tāmarai a just-waking-up “Gute nacht, schmetterling”, (‘Good night, butterfly’), as Rinn heads out of the tent. He checks the campsite as well, makes sure the fire will keep going at a low burn, then climbs up into a tree to keep an eye on things. While on watch, he processes over things from various conversations from earlier that day/evening. He’s still a bit surprised at Tāmarai’s acceptance of him as a thief, especially since she is a ‘fancy’ sort, but he figures out that money (and ‘fanciness’) is not an absolute way to judge someone’s character.

As for dreams and trust (and Stubby), that is harder to go over. Rinn finally settles on exactly how Stubby can trust so easily, thinking back onto her family- blood and adopted- that he’s seen her talking to via the communication stone. It gets him thinking about family, and he pulls out from the make-shift money belt from under his clothes a small trinket, a pendant made from carved carnelian, to look at for a few moments before it gets tucked back away. 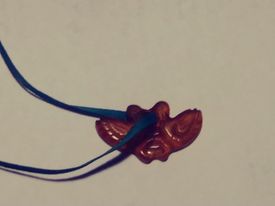 Most of the rest of his watch passes by eventually- except near dawn. Then, Rinn sees lightning strike up near Old Vasselheim again, and a voice saying ‘Come’, as before in his dream.

He doesn’t mention this to the others, as they wake up and eventually get on their way.

No comments to show.